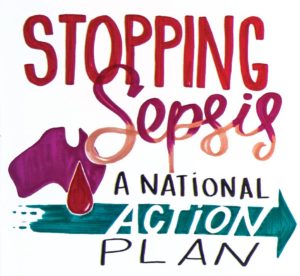 It’s known as the silent killer and takes more lives than the annual road toll.

Summary of key recommendations from the round-table:

1. Establish a nationally-coordinated sepsis body to facilitate the action plan
2. Invest in prevention and awareness campaigns to spur action within the community
3. Establish and implement a nationally recognised clinical standard for sepsis detection and treatment
4. Invest in community and peer support services for sepsis survivors and their families.

The action plan is backed by the Australian Commission on Safety and Quality in Health Care, the Australian and New Zealand Intensive Care Society and the NSW Clinical Excellence Commission as well as leading health policy professionals and sepsis survivors.

Professor Simon Finfer, head of the Australian Sepsis Network, said that whilst sepsis was often difficult to detect, it can be prevented and treated successfully if diagnosed quickly. “Sepsis kills more Australians each year than breast or prostate cancer, but there’s no public outcry about this, or national campaign to reduce the shockingly high death rate.

“Sepsis can be prevented and, in many cases, can be treated successfully. We need to ensure that when patients present with symptoms they receive the best care possible, and that treatment begins as quickly as possible,” said Professor Finfer.

Sepsis is estimated to cost Australia $4.7 billion each year with many cases beginning in the community rather than in hospitals.

For those that survive, half are left with a disability or impaired function that also impacts their family and friends.

The national action plan is a call for increased and coordinated efforts to raise awareness of sepsis, improve diagnosis and treatment, and provide greater support for Australians who have experienced sepsis. The ASN is working towards implementing these recommendations……..be a part of this national collaborative to tackle sepsis in Australia.

On 13 September 2019, Minister Hunt announced $1.5 million in funding for The George Institute Australian Sepsis Network (TGI-ASN) to support improved sepsis outcomes. The Australian Government Department of Health (the Department) engaged TGI-ASN in partnership with the Australian Commission on Safety and Quality in Health Care to lead and coordinate the National Sepsis Program through a funding agreement to June 2022.

The program aims to improve outcomes for people with sepsis in Australia by:

The Sepsis Clinical Care Standard ensures that a patient presenting with signs and symptoms of sepsis receives optimal care, from symptom onset through to discharge from hospital and survivorship care. Sepsis is a life-threatening condition that arises when the body’s response to an infection damages its own tissues and organs.

The Sepsis Clinical Care Standard will help to ensure sepsis is recognised early and patients receive coordinated, best-practice care so that the risk of death or ongoing morbidity is reduced. This includes timely recognition of sepsis, early and appropriate antimicrobial therapy and continuity of care from the acute setting through to discharge and survivorship.

The Sepsis Clinical Care Standard was launched via webcast on Thursday, 30 June 2022.

Broadcaster and commentator Julie McCrossin AM, led an engaging discussion about the early recognition of sepsis and rapid assessment and treatment, and post-sepsis syndrome, with expert panellists:

The standard was launched by Professor Villis Marshall AC, Chair of the Board of the Australian Commission on Safety and Quality in Health Care.

See the launch at: Launch Webinar

Contents of the standard and resources

The clinical care standard provides guidance for consumers, clinicians, and healthcare services including information about what each statement means, and a series of implementation resources.

Several resources have been developed to support the implementation of the Sepsis Clinical Care Standard. These include guidance around the use of antimicrobials and lactate, patient information resources, and discharge planning tools and resources. A number of case studies illustrate best practice and innovation in sepsis care. Stay tuned for more resources including podcasts, and slide decks discussing key aspects of the Sepsis Clinical Care Standard.

You can also find links to relevant related resources, including sepsis resources from states and territories around Australia.

The standard was developed in  consultation with a topic working group of clinicians, researchers and consumers. Public consultation on the clinical care standard was carried out between August and September 2021. The standard has been endorsed by 26 key professional associations and consumer organisations including the Australasian College for Emergency Medicine (ACEM), the College of Intensive Care Medicine of Australia and New Zealand (CICM), the Council of Remote Area Nurses (CRANAplus), the Australian Sepsis Network (ASN) and the National Aboriginal Community Controlled Health Organisation.

Further information is available on the evidence base which underpins the Sepsis Clinical Care Standard, and the rapid literature and evidence review commissioned to inform the standard’s development.