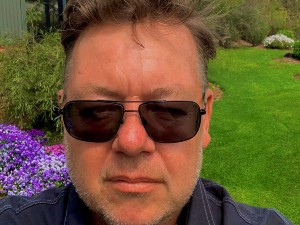 Late October 2019 I was bitten on my wrist by a white-tailed spider* which resulted in a not so insignificant lesion on my left wrist. At the time it really didn’t seem like a big deal, a script from my GP for antibiotics appeared to clear it up after a week and a bit. Shortly after this occurred, I started getting some serious back pain in the lumber region of my spine. Initial thoughts on what was happening focused on some minor physical injury, which resulted in perhaps a slipped disc or muscle strain/tear. Oh, and the inevitable lose some weight of course came up.

With the wound on my wrist healing & Drs at the local medical centre prescribing ever stronger pain medications & muscle relaxants over the course of a week, I again got myself back to the medical centre after what I thought back then was a truly agonising weekend. Bloods were promptly taken and sent off. That same afternoon I received a call from the Medical Practice to get down there immediately where upon arrival I was told in no uncertain terms to get myself to the regional hospital immediately. My inflammatory markers from the blood test had come back over 400 when I believe they should be between 4-8. Apparently, a high score in this test is not a great result.

As I understand it an antibiotic resistant golden staphylococcus bacterium entered my blood stream from the wound infection. Large abscesses had also developed way to close to my spine (T3, T4, T5). Sepsis, triggered by the infection, had well and truly taken hold; my kidneys & liver had started to shut down and I was developing septic shock. On presentation to Wagga Wagga Regional Base Hospital, further tests were conducted to determine what was going on and I was airlifted to Sydney. What followed was more tests revealing an abscess approximately 140mm in diameter. I immediately underwent a few surgeries and spent roughly 2 weeks recovering in the acute ward. That time in hospital is somewhat of a blur. Severe Sepsis and a truck load of meds will do that. I’ve never felt so sick and toxic in my life. Not surprising as Sepsis had come very close to killing me.

Recovery started by dealing with the Golden Staph. Daily trips to the local small regional hospital involved intravenous antibiotics administered through a PICC line straight into my heart for 3 months followed by 3 months of oral antibiotics. I understand that Golden Staph likes to hide so killing it was the priority. Quite remarkably I was to recover with little to no organ damage and all my limbs still attached and working. Removing the PICC line and a subsequent ultrasound revealed a large 330mm blood clot in my upper left arm. Appropriate blood thinning medication for 4 months fixed that. Anyone who’s been on Warfarin knows what fun that is. Throughout my sepsis ordeal little thought was given to Post Sepsis Syndrome (PSS) and quite understandably.

Since my initial hospitalisation and some 15 months down the track, I have gotten to know PSS intimately. I didn’t even know PSS was a thing for the first 7 months. I’ve never heard it mentioned by over a dozen doctors I’ve seen in that time. Why, I don’t know. All I heard from numerous Drs was that recovering from this could take quite some time.

PSS is an absolute monster which several times has come close over the last year to defeating me both physically and mentally. At the time of writing this I’m just getting over the latest episode (7+ weeks of truly agonizing pain, fatigue and shortness of breath) and still have a few issues to overcome. In fact, writing my story has taken well over a fortnight and many, many attempts to get it in any readable coherent shape. Sepsis and very strong pain medication has affected some cognitive ability that I’ve always taken for granted. It’s slowly coming back.

From what I know of PSS, it can affect people differently. For me it’s been severe backpain, 24 hours a day, 7 days a week with relatively little letup for over a year, insane muscle spasms, memory/cognitive issues, shortness of breath (very scary), fatigue and insomnia along with the expected strain on mental health, to name just the major issues. All through that time and up until now pain has been the major constant, perhaps due to the location the abscess. Having it reside and radiate from the lumber region of your back does not make anything easy. I am unable to drive long distances (I’m rural so that’s been a huge issue), sit, stand, walk or even lay down in one position for any reasonable period. Pretty much 45 minutes in one position give or take inevitably results in elevated pain levels and extended bed rest. Even then 45 minutes can be way to long. Long lasting strong pain medication taken roughly 12 hours apart guarantees more than a few hours of intense pain for the few hours before I’m due to take the next dose. Far from ideal but I intend to get out of this without an opioid addiction issue.

Incapacitating lumbar pain and duration, no doubt led to a few herniated/bulging disks in the middle of 2021, something I’ve never had an issue with before. I’ve never had any back issues/pain. None. In fact, I haven’t been admitted to a hospital for a few decades. These issues all added to existing pain levels, resulting in more than a few trips to the emergency department or the local GP to get additional pain medication in an effort reduce pain to a controllable level. And that then involves more bed rest. Despite many attempts to work through these incapacitating pain issues I’ve come to realise that, for me, PSS ignores any mental determination to make meaningful physical progress and comes at me in waves for no apparent reason.

Basic minimal daily stretching, meditation, breathing exercises and pain meds/anti-inflammatory and muscle relaxants all continue to play an important role. Pain meds alone do not fix the problem, nothing does, however a combination of these help with pain management and mobility. With no Pain Specialist or Neurologist between Sydney and Melbourne (excluding the ACT, all were booked through to early 2022). I’ve tried many many things (the majority of which have failed painfully and resulted in significant bed rest) in a considered manner with my GP and physiotherapist to get on top of it. These have included graduated exercise which basically means hitting a target of a certain number of steps per day (starting off a very low number) and not exceeding it. Then increasing that after say, a week. The idea is to build an under lying level of basic strength and avoiding spiking any level of exercise/walking. Despite my best considered efforts, pain however inevitably comes back bigger and more savage than the last time. Fatigue and shallow breathing inevitably follow closely. Many MRIs continue to find no structural issues and bloods remain clean. Whilst this continues to demonstrate positive news, uncertainty as to what’s happening does nothing for mental health. A recent consultation with a neurosurgeon and more scans indicates no structural damage so the confusion as the why and what’s causing it continues. Or maybe this is just PSS playing out.

Very light workouts in a gym and swimming have again all resulted in increased pain levels and muscle spasms that manifest after a short period of time again requiring further rest and or medical assistance,=. I’ve been exhausted from physical work/exercise before like most people, but fatigue is something else and is incredibly debilitating and frustrating. Severe levels of constant pain I’ve come to understand is also incredibly exhausting both physically and mentally. As you’d expect with this level of inactivity weight has been a constant issue. That said I’ve managed to drop 15 kilos since my initial hospitalization by simply adjusting my diet. After starting a Keto diet which in my opinion led to higher pain levels I have, for the last 6 weeks adopted a diet avoiding sugar, alcohol, carbohydrates and red meat. Something that I’ve read about cutting out inflammatory foods and it seems to have been of assistance. Time will tell.

So, for the moment rest with regular daily gentle stretching continues and minimal walking is the plan, until I see a neurologist in early March 2022. This booking was made sometime in the middle of 2021 and was the only available slot after an exhaustive search. I’m ok with this now, but I’ve got to say (and I say it laughing) that when I’ve rung pain specialists without fail you always get the same question. “When would you like to see Dr Such and such.” And as everybody who wants to see a pain specialist will know, the answer is always NOW!

Over the course of this experience, I’ve met all sorts of people, from all walks of life who have not fared as well as me with their Golden Staph and/or Sepsis experience. That said they’d be without doubt some of the bravest and most determined people I’ve ever met. Bravo people, Bravo.

I’m one of the lucky ones. Never give up fighting.

Go well & thanks for reading

• I understand there is no empirical evidence to support this medically however I find it hard to dismiss when I saw the little s**t bite me.