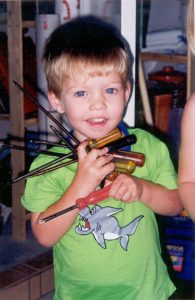 Preston James Steele-Alston died on 10 August 2003 at two and a half years of age. Preston was under the care of doctors and was being treated for pneumonia from a simple virus, which caused an acute lung injury. This allowed a secondary bacterium to invade his body causing an overwhelming sepsis. Preston was promptly put on life support but died a few short hours later.

Preston was a happy, cheeky and robust boy – tall and strong for his age. While he often had colds and respiratory bugs his paediatrician assured us that he would grow out of it. He loved books and music and would sit for hours being read to and mouthing the words as the pages turned. He was obsessed with Shrek, Monsters Inc and the Wiggles. We had such hopes for his future.

In a blink of an eye all of this was taken from us. Although Preston had an acute lung injury, his death was due to organ failure from sepsis which was not identified and treated in time to save his life. In fact, as doctors were investigating his death, causes were described as ‘complications with pneumonia’. The word sepsis was not used.

To ensure his short life was a gift to others his mum, Mary and a group of friends established the Preston James Fund in collaboration with the Mater Foundation raising funds to support initiatives in Paediatric Intensive Care which contribute or relate to the survival and recovery of children with acute and/or life threatening illnesses. From 2004 to 2014 the Preston James Fund raised over $500,000 for life saving research and equipment.

Now that sepsis is recognised as a global issue and as a condition which is treatable with early diagnosis – Mary is involved with a number of committees which advocate for improvement in diagnosis and treatment of sepsis.