Sarah was no stranger to hospitals when she developed sepsis in October 2017. At only 18, she was battling a pituitary tumour and two inoperable optic gliomas (a type a tumour on the nerve that connects the eye to the brain) that had caused blindness in her right eye, and was undergoing weekly chemotherapy at Sydney’s Royal North Shore Hospital.

As part of her chemotherapy, Sarah had a ‘port’ inserted: a small disc under the skin, with an attached tube leading to a large vein. Chemotherapy medicines are given through the port with a special needle.

During the early stages of her chemotherapy, Sarah visited another Sydney hospital for a check-up. She began feeling unwell shortly after and returned to the hospital, only to be told she had a virus and to go home to rest.

One week later, Sarah was taken by ambulance to the emergency department (ED) after collapsing. She was given pain relief, and had bloods taken. Doctors were satisfied with her blood results and discharged her. 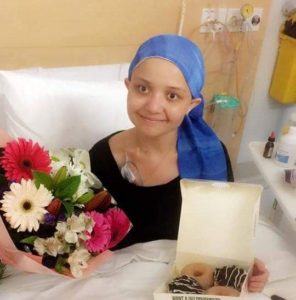 The following day, Sarah received a call from the ED doctor who had treated her, asking her to come in for treatment for a “mild infection”. She was given a bed and told she had “septicaemia” via her chemo port. She had her infected port removed, and a ‘PICC line’ inserted (an internal catheter for IV access). Sarah spent two weeks in hospital, receiving antibiotics via IV, and was discharged despite still feeling unwell.

Two days later Sarah was once again taken to hospital by ambulance – this time listed as critical, with dangerously low blood pressure. This time, Sarah was treated with fluids and four different antibiotics, and received multiple blood transfusions. Her PICC line had also become infected, and was removed.

Sarah spent close to a month in hospital being treated for sepsis – the result of four different types of bacteria in her infected port and PICC line.

She is now recovering slowly, but sepsis has left her body too weak for any more chemotherapy or radiation treatment for the inoperable tumour she still lives with. She also suffers from painful nerve damage. 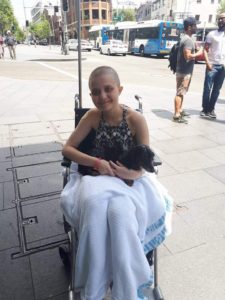 Before developing sepsis, Sarah had completed a Diploma of Nursing and was undertaking work placements to further her career. Her time in hospital and ongoing sepsis-related health issues have meant she is not able to continue her nursing placements – but she says her medical knowledge helped her recognise the symptoms of sepsis.

Sarah is now focusing on a new career path – having been accepted to university to study a Bachelor of Criminology and Criminal Justice – and her ongoing health and recovery.